The RESTORE Council (Council) has announced an update to the process for the next round of Bucket 2 funding opportunities, FPL 3. The Council will develop the FPL 3 in two phases, a and b. Developing the FPL 3 in two phases will enable the Council to respond to urgent ecosystem needs, save money, and take advantage of important partnership opportunities to advance large-scale ecosystem restoration in the near term. For FPL 3a, the Council will seek public comment as it considers two ecosystem projects, one in Louisiana and one in Alabama. In the second phase, FPL 3b, the Council would consider restoration projects and programs that address additional ecosystem needs across the Gulf, including Texas. FPL 3a and 3b will adhere to the FPL development processes committed to by the Council, particularly as they relate to best available science (BAS), public engagement and transparency, and the Council’s recently finalized Planning Framework. For information on the two projects being considered on FPL 3a, please visit https://www.restorethegulf.gov. Also, continue to visit this site for updates on the on-going efforts in Texas to develop proposals that could be considered for funding through FPL 3b, as well as associated timelines. TCEQ Executive Director and Governor Abbott’s appointee to the RESTORE Council Toby Baker’s presentation at the September 9 and September 10 public meetings.

The TCEQ has posted the following Request for Proposals (RFP): Oversight and Monitoring Services for Restore Act Grant Projects. The solicitation number is 582-20-10405 and involves Class 926, Items 40, 42 and 72 and Class 958, Items 25, 26 and 77. The RFP can be accessed through the Electronic State Business Daily (ESDB) web site. On the web site, in the “Solicitation ID/PO Number ” field, enter the solicitation number (582-20-10405) and then click on “Search” to access this solicitation. The deadline for submitting proposals in response to the RFP is 3:00 pm (central time) on Thursday, September 12th. A pre-proposal conference has been scheduled for Tuesday, August 20th, 2019 at 9:30 A.M. (Central Time). Attendance at the pre-proposal conference is not mandatory; however, attendance is strongly recommended. The location of the Pre-Proposal Conference is at the Texas Commission on Environmental Quality, 12100 Park 35 Circle, Building D, Conference Room 191, Austin, TX 78753. Through this RFP, the TCEQ is seeking a Contractor(s) to provide scientific and technical services to assist TCEQ with its duties related to monitoring and oversight of funded projects awarded to Texas under the Resources and Ecosystems Sustainability, Tourist Opportunities, and Revived Economics of the Gulf Coast States Act (RESTORE Act). The Contract may also be utilized at the discretion of TCEQ for other activities related to the RESTORE Act program. All questions concerning the RFP must be presented through the ESDB site, listed above.

On March 4, 2019, Toby Baker, TCEQ Executive Director and Governor Abbott’s appointee to the RESTORE Council, received approval of Texas’ Initial State Expenditure Plan (SEP). As a reminder, the initial SEP focuses on Hurricane Harvey recovery efforts and is a programmatic plan addressing the distribution of approximately $31 million in RESTORE Bucket 3 funds. Other plans will be developed in later years as additional Bucket 3 funds become available. Texas is expected to receive a total of $121 million by the end of 2031. With the approval of the Texas programmatic SEP the next steps to secure the Bucket 3 funds for Texas projects are outlined below: Projects selected to move forward under the approved SEP must comply with the programmatic SEP requirements, such as, but not limited to the following:

TCEQ RESTORE staff continue to prepare federal applications for submission to Treasury to receive grant awards for Bucket 1 funds. TCEQ will submit seven federal applications consisting of 22 of the 26 projects in the accepted Multi-Year Implementation Plan (MIP). The applications are based on the following primary eligible activities: Restoration & Protection; Mitigation; Promotion of Consumption of Seafood; Planning Assistance; Tourism; Flood Protection; and Workforce Development. Each of the 22 projects will be included in one of the seven applications associated with the eligible activity that it was listed under in the MIP. Staff has submitted the following applications to Treasury: Restoration & Protection (four projects); Flood Protection (five projects); and Workforce Development (two projects). The Tourism application (six projects) is currently being finalized. As a reminder, approximately $97 million is currently available to Texas under Bucket 1. Projects moving forward to the application phase were selected by then TCEQ Commissioner Baker using his discretionary authority and in consultation with the Office of the Governor. Factors that were considered included whether the projects (1) strengthen coastal resiliency, (2) stimulate local coastal economies, (3) increase tourism, and (4) establish a foundation for future economic and ecosystem restoration through careful planning and study. Consideration was also given to projects that had a strong economic component in addition to ecological restoration. Finally, these projects were also selected to provide funding for as many RESTORE eligible counties as possible, as well as to ensure a cross-section of projects that addressed as many of the RESTORE eligible activities as possible. Any questions concerning the Bucket 1/MIP process should be directed to the TCEQ’s Procurement and Contracts section in the Office of Administrative Services at arthur.french@tceq.texas.gov.

The Resources and Ecosystems Sustainability, Tourist Opportunities, and Revived Economies of the Gulf Coast States Act of 2012, or The RESTORE Act. The RESTORE Act dedicates 80 percent of any civil and administrative penalties paid under the Clean Water Act, after the enactment of the RESTORE Act, by responsible parties in connection with the Deepwater Horizon oil spill to the Gulf Coast Ecosystem Restoration Trust Fund for ecosystem restoration, economic recovery, and tourism promotion in the Gulf Coast region. Following resolution of administrative and civil penalties, Texas is expected to receive at least $550 million in RESTORE funds through 2033. The Gulf Coast Ecosystem Restoration Council (Council) is charged with helping to restore the ecosystem and economy of the Gulf Coast region by developing and overseeing the implementation of the RESTORE Act. The Council includes the Governors of the States of Alabama, Florida, Louisiana, Mississippi and Texas and the Secretaries of the U.S. Departments of Commerce, Agriculture Army, Homeland Security and the Interior and the Administrator of the U.S. Environmental Protection Agency. Texas Commission on Environmental Quality Commissioner, Toby Baker, has been designated by the Governor of Texas, as the Texas representative on the Council. In addition, the RESTORE Act authorizes the U.S. Treasury to manage the activities conducted by the states under Buckets 1 (Direct Component) and 5 (Centers of Excellence).

Allocation of Funds Under the RESTORE Act 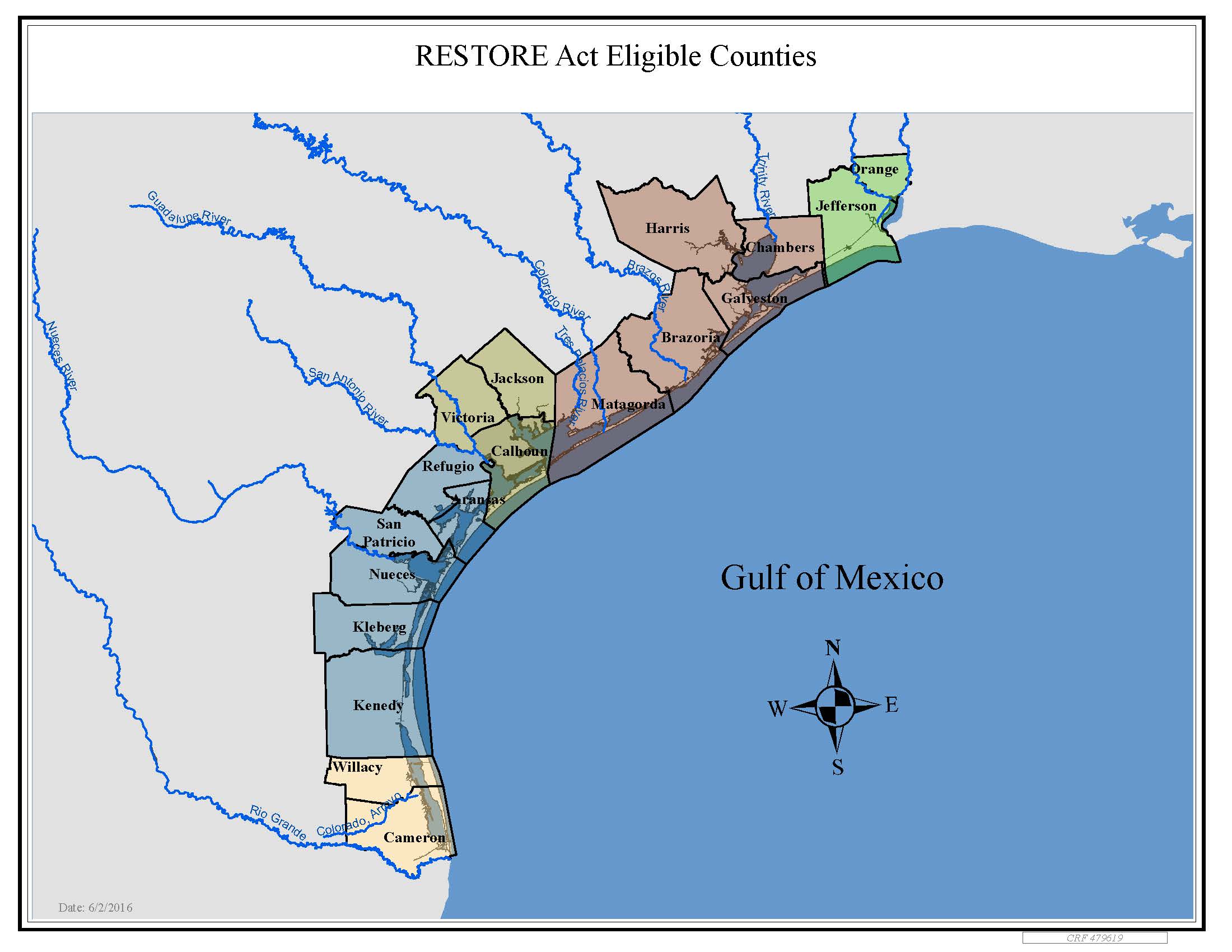 In his capacity as TCEQ Commissioner, Toby Baker was appointed by the Governor to perform RESTORE-related duties for Texas, including representing the state on the federal RESTORE Council. Baker is responsible for directing the state’s activities to secure RESTORE funds associated with four of the five components under the federal RESTORE Act. These components include: Direct (Bucket 1), Council-Selected (Bucket 2), Spill Impact (Bucket 3), and Centers of Excellence (Bucket 5). Baker’s gubernatorial appointment to the Council remained in place when he became the TCEQ Executive Director.

Under Bucket 1, 35% of the RESTORE Funds are available in equal amounts to each of the five Gulf Coast states. Each state must submit a Multiyear Implementation Plan (MIP) to the U.S. Treasury prior to receiving grant awards. Funds under Bucket 1 provide the Gulf states with the most discretion in selecting projects to receive grants. Projects receiving Bucket 1 funds must address ecosystem restoration and economic development along the Texas Coast. See above for updates on the latest Bucket 1 activities.

The RESTORE Council receives 30% of the total RESTORE funds to support Bucket 2 projects. Projects funded under Bucket 2 implement the RESTORE Council’s Comprehensive Plan. The grant funds can be used for ecosystem restoration and protection in the Gulf Coast region. Council Members, representing the five Gulf Coast states and six federal agencies, submit projects to the RESTORE Council for consideration. Project selection is competitive and is based on priority criteria presented in the federal RESTORE Act. Under the first round of Bucket 2 funding, referred to as FPL 1, approximately $26 million for six projects were approved for Texas. Four of the six projects in Texas will be managed by the state, through the TCEQ. Those projects include: Matagorda Bay System Landscape Conservation, Bayou Greenways, Bahia Grande Coastal Corridor, and Texas Beneficial Use and Marsh Restoration. Also under FPL 1, ,NOAA, through the U.S. Department of Interior, was awarded grant funds to engage the Gulf of Mexico Coastal Conservation Corps (“GulfCorps”) Program in developing a Gulf-wide conservation corps that will contribute to meaningful Gulf of Mexico ecosystem restoration benefiting coastal habitat and water quality in each of the Gulf coast states, while economically benefiting coastal communities through education, training, and employment opportunities. The GulfCorps recruits, trains, and employs workers to implement habitat restoration projects and develop skills in support of long-term Gulf coast restoration. NOAA established a cooperative agreement with The Nature Conservancy (TNC) to develop and administer the GulfCorps program within each Gulf state, including Texas. Activities conducted by the Texas GulfCorps crew in the spring of 2018 included: Armand Bayou Nature Center Stewardship, the crew: Artist Boat’s Coastal Heritage Preserve Stewardship, the crew: Additionally, the Texas crew received training in the following: See above for updates on the latest Bucket 2 activities.

Under Bucket 3, 30% of RESTORE Funds is divided among the five Gulf Coast states based on a RESTORE Council approved funding allocation formula. Under this formula Texas receives 7.58% of the 30%. The eligibility requirements to receive Bucket 3 grant funds are similar to Bucket 1; ecological and economic projects for restoration of the Texas Gulf Coast region. To receive grant funds, the states are required to submit a State Expenditure Plan (SEP) for Council approval. The SEP submitted by Baker on behalf of the state was approved by the RESTORE Council Chair in March 2019. See above for updates on the latest Bucket 3 activities.

Texas was the first state in the nation to receive money from the RESTORE Trust Fund through an award from the U.S. Treasury to fund two Centers of Excellence. The two centers, Texas OneGulf, at Texas A&M, Corpus Christi and Subsea Systems Institute, at the University of Houston, equally share an initial $4,038,000. The establishment of the centers is part of Texas’ ongoing implementation of the RESTORE Act which requires that the five Gulf States affected by the 2010 Deepwater Horizon oil spill establish centers to conduct research on the Gulf Coast Region. An amended award for Bucket 5 funds was issued by Treasury. The amended award provides an additional $1,000,000 to each of the two Texas Centers of Excellence through 2020, for a total of $3,018,000 each. The additional funds will support both the projects conducted by the Centers, as well as the Centers’ administrative expenses. The Texas OneGulf Center of Excellence, established in January 2015 and led by Texas A&M University-Corpus Christi, is a consortium of Texas marine oriented science and human health institutions. Their efforts focus on research activities that emphasize sustainable and resilient growth, as well as economic and commercial development in the coastal region. For more information on the Texas OneGulf Center of Excellence, visit the Texas OneGulf website at http://www.texasonegulf.org/ The Subsea Systems Institute was established in 2015 under collaboration between the University of Houston, Rice University and the Johnson Space Center (NASA). Their focus is offshore energy development, including research and technology to improve the sustainable and safe development of energy resources in the Gulf of Mexico. For more information on the Subsea Institute, visit http://www.uh.edu/uh-energy/research/subsea-institute/

Please check this website periodically for opportunities for public participation, as well as updates on on-going activities.

Links to Past RESTORE Documents

The Framework Document outlines the importance of the Texas coast and Texas’ implementation of the RESTORE Act. View the FRAMEWORK Document.